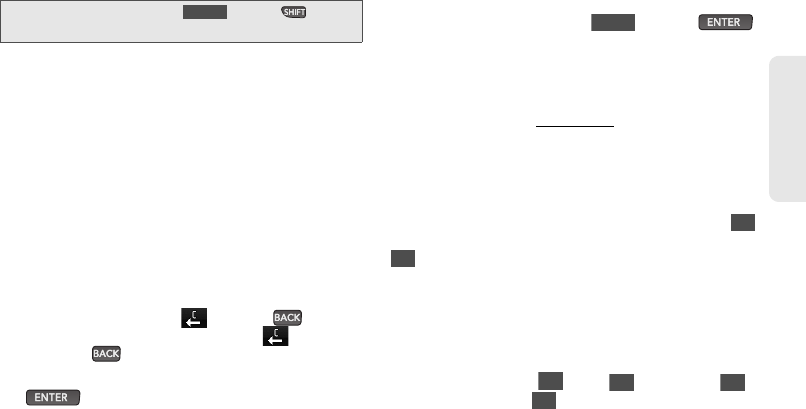 2A. Phone Basics 29
Phone Basics
Ⅲ Emoticon to enter “emoticons.” (See page 30.)
Ⅲ Smileys to enter smileys. (See page 30.)
Predictive Text Input
Predictive Text Input lets you enter text using a few
keystrokes per word. (To select the
Predictive Text
mode when entering text, see “Selecting a Text Input
Mode” on page 28.)
Predictive Text Input uses an intuitive word database to
analyze the letters you enter and create a suitable
word. (The word may change as you type.)
1. Select the Predictive text input mode.
2. Enter a couple of letters of a word. When you enter
a letter of a word, a small window will appear and
shows the words starting with the letters. (If you
make a mistake, touch or press to erase
a single character. Touch and hold or press
and hold to erase an entire word.)
3. Scroll to the desired word and touch it or press
to select it.
4. If a word you want to enter is not displayed in the
list, select
Add Word? to add a word to the
Predictive Text Input database.
5. Enter the word and touch or press .
The word will appear as an option the next time
you scroll through options during Predictive Text
Input.
For more information about Predictive Text Input, visit
the Tegic Web site at
www.T9.com.
ABC Mode (Touch Keypad Only)
In Abc mode, also known as multi-touch entry, you
touch keys one, two, three, or four times to enter the
letters you see on the keypad. For example, touch
once for “a,” twice for “b”, or three times for “c”; or touch
once for “p,” twice for “q,” three times for “r,” or four
times for “s.”
1. Select the Abc mode. (See “Selecting a Text Input
Mode” on page 28.)
2. Touch the corresponding keys repeatedly until the
correct letter appears. (For example, to enter the
word “Bill,” touch twice, three times,
three times, and three times again.)
Tip: When entering text, touch or press to
change letter capitalization (Abc > ABC > abc).
SHIFT
Done
2
7
2
4
5
5
previous next